AMBI is a popular line of skin care products that are sold online and in a variety of retailers like Walgreens, CVS, Target, and Kmart. The company produces a wide range of cosmetics including moisturizers, cleansers, lotions, and more.

Perhaps one of its most popular and most searched items, though, is the AMBI Fade Cream, a topical treatment targeted at fading dark spots and evening out skin tones.

AMBI Fade Cream comes in 2 different versions: 1 for normal skin and 1 for oily skin. It is a hydroquinone-based skin lightener (similar to Proderma Light and NeoStrata HQ) that supposedly shows visible results after just 2 weeks of regular use.

The cream also has a built-in sunscreen (with a 2% octinoxate base and SPF 30) but the product page still recommends using another sunblock in combination with Ambi Fade for best results.

Here are the known ingredients in the cream:

Vitamin E is an antioxidant which helps to protect good skin cells and repair damaged ones. Hydroquinone, as we’ve mentioned countless times, is thought to be a potentially harmful skin lightening agent (even though the AMBI website specifically states that it is safe).

Is hydroquinone safe? Hydroquinone is banned in a few different countries because of the possible risks associated with its use. Alpha Hydroxy Acid is known for its capabilities to reduce wrinkles and prevent skin aging.

Still concerned? Our alternative suggestion is to try using a non-Hydroquinone based product such as Palmer’s Cocoa Butter Fade Cream or top-rated Meladerm skin lightener before using a potent, potentially dangerous product like this.

Oddly, there seem to be a lot of rave reviews available for AMBI’s skin lightening cream. They seem a bit suspicious at times, though, and within the mix you’ll find honest evaluations claiming that the product did little to fade dark spots and that it smells terrible.

Here are some of the reviews we uncovered:

Its crazy to that something so inexpensive works so well! My mom has used this product for many years and had amazing skin. I in my ignorance looked around for other products that were name brands and far more expensive until I decided to give this a try. It works beautifully!
I have oily skin and am always leery of products and how they will perform under my make up. I’ve never had an issue with this product. It does not make my face oilier or breakdown my make up at all.
Since I’ve started using this I’ve gotten compliments on my skin. The moisture it gives plus the lightening of my sun spots has certainly been noticed not just by me.
Anonymous

Ladies this is my 6th time ordering from them they no longer sell it in stores idc if they are $20 a bottle I’m ordering I’m light skinned and my skin is sensitive to sweat and whatever else… I had rashes under my breast gone in 3 days ..THREE DAYS …the mark on my foot where I had stitches ten yrs ago is fading… the dark marks under my eyes are gone …dark marks between my thighs are gone ..this product brought me to tears… marks I’ve had for over 10 years are fading..now of course the older the mark the more applications are necessary and for a longer period of time…they work…I have embarrassing scars on my butt that I’ve tried to remove with everything this fade cream works I buy five at a time use in the am and at night after every shower …I use it on my entire body
April Griffin

Overall, AMBI Fade Cream manages to average a 3.5 to 4 star rating across most sites online. Many claim that it works well but we find this a bit hard to believe due to the low % of active ingredients and the fact that some of these consumer reviews seem over-hyped. But we’ll let you be the judge of that.

My own dermatologist is concerned about hydroquinone in skin lightener creams. Because of this, I stick with Meladerm (even though it does cost more).

Nevertheless, the AMBI Fade Cream has proven useful for many other people, most notably my girlfriend Denay, who is a black woman in her mid-40s. Her overall skin tone is a gorgeous cappuccino brown but she swears that there were plenty of discolorations before she began using this fade cream about 6 years ago.

Based on reviews I found on the web, her success is pretty common! And AMBI Fade Cream is readily available at most pharmacies and is crazy-cheap through Amazon.com.

For how affordable it is, it certainly can’t hurt to try it for yourself. Just be aware that hydroquinone may not be the safest lightening agent out there, and check in with a dermatologist if you use one. 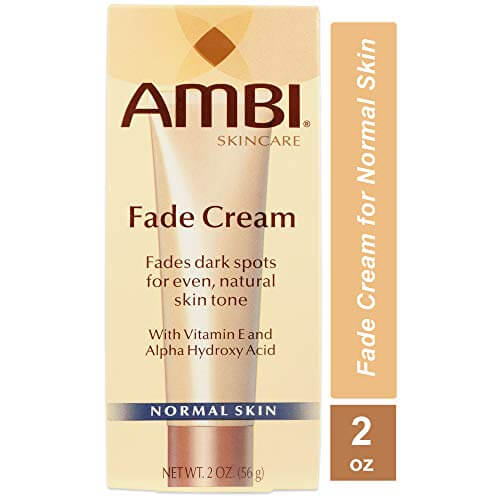 Got an annoying mole that really stands out on your face or skin? Have a painful and embarrassing skin tag that just doesn’t want to go away? These are both frustrating and common issues that millions of people face. And, for the most part, there isn’t an easy solution for either one aside from cosmetic…

Sick of dealing with nasty breakouts, painful pimples, and the scars and discolored spots associated with the aftermath of acne? It’s no secret that nearly everyone is forced to battle with acne at some point in their lives. No matter if it’s during your teen years when you’re first experiencing puberty or, even more embarrassingly,…

Aside from the face what parts of the body show age more than anything else? That’s an easy one. The chest and neck, if not properly cared for, can quickly and easily give way to the signs of aging. The skin around these areas tends to get damaged by the sun easier, becomes loose, or…

Melasma is dark spots on the skin that may be brown or grey in color. They are caused by an over production of melanin and may appear at anytime but generally get worse with age. Pregnant women are particularly susceptible to these sun spots, and although they are not dangerous in themselves they can indicate…

No one’s skin is flawless. Even the most beautiful people in the world have to contend with dark spots or similar imperfections. And that’s where the best dark spot correctors come in. There’s a lot of solid science behind skin whitening, but finding the right product for your skin type can be tricky. That’s why…