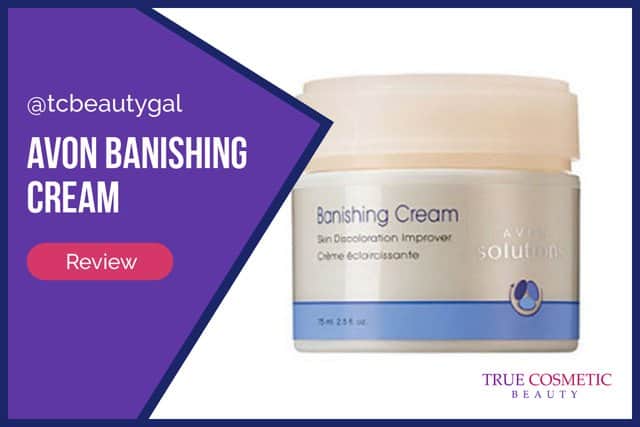 Avon is a well known cosmetics company that has produced a huge variety of beauty products, ranging from standard moisturizers and shampoos to much more complex skin care items. Their products are generally sold by independent representatives but are also found on websites like Amazon and on TV shops such as QVC. 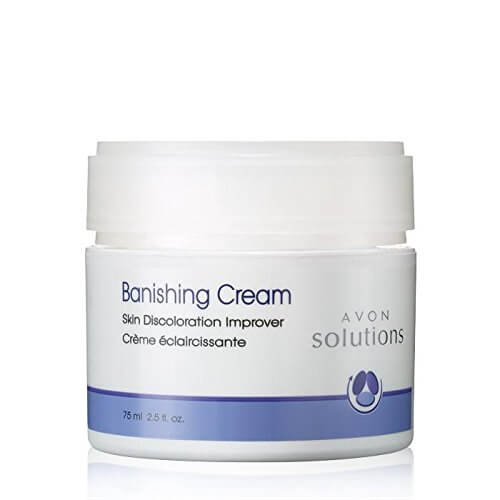 Their solution for the skin lightening craze is the Avon Banishing Cream.

Avon Banishing Cream is a very cheap night cream designed to help brighten skin and correct discolored skin tones. It is made using a blend of various acids, extracts, vitamins, and other chemicals. According to the official product description, it is supposed to gradually fix uneven skin tone and work to fade small dark splotches, too. This cream is intended to be used every morning and night.

Here is the full ingredients list of the banishing cream:

In most cases this product has received average to sub-par ratings. Many people state that the cream does nothing to reduce the appearance of dark spots or other forms of hyperpigmentation. Many more claim that the cream makes their skin very oily and even causes breakouts.

Overall, Avon Banishing Cream typically gets a 3 to 3.5 star rating out a possible 5 on most websites. One of the major advantages of this product is that it’s pretty cheap. But unfortunately not many people have seen great results using it. It’s simply not potent enough and causes other unwanted skin issues for some.

Need a better alternative? We highly recommend using something with more potency and effectiveness such as Civant Meladerm Cream or even Skinception Illuminatural 6i – both are a bit more expensive but are proven to work well on dark spots and correct skin tones in as little as 2 or 3 weeks.

The old saying “you get what you pay for” really holds true in these particular situations. Sure, the Avon lightening cream may be fairly cheap but you’ll see very little in terms of results when using it. Even the individuals that did see a difference in their skin said they had to use the product for months before it worked.

Almost any mid-grade skin lightener will prove to be much more effective than Avon’s banishing cream. Their products are simply inferior. They are cheap, though, so if you want to give it a shot, it’s not like you’ll be losing a lot on the deal.

My friend Melinda spent almost a full day in the local hospital’s emergency room (ER) because of a bad reaction to a toner. She has become very picky about what she uses and the Obagi Nu-Derm toner is her favorite. Now, she has the skin tone of a proper Irish lass. It’s white as a…

Dark spot removal questions are the number one request that we get here at True Cosmetic Beauty, and so today you get some answers. The simple truth is that choices you make about your daily routine can help more than anything.  And that’s the case with 5 of the 7 tips you’ll read below. You’ll…

The Braun Silk-epil 7 Wet/Dry Electric Hair Removal Epilator has all the usual features you would expect from the leaders in the industry. Most of Brauns’ epilators can be used on the body and legs, but this epilator can also be used for removing facial hair and trimming up sensitive areas. The Braun Silk Epil 7 Epilator is…

Obagi Hydrate is a facial moisturizer that works really well. It is a part of the Nu-Derm line and is highly recommended for a variety of skin complications like acne or dryness/flaking. But most women demand a quality moisturizer in even a standard daily regimen. Below you’ll find more information about the product, customer reviews,…

NOTE: Sorry to say that Obagi has decided to discontinue this kit.  My favorite piece of the kit is still available as the Nu-Derm Gentle Cleanser, though, which is big and lasts forever (making it very solid value for the money). Tired of things like fine lines, wrinkles, and discolored patches on your skin making you…

Tired of seeing blemishes, dark spots, and wrinkles when facing yourself in the mirror every day? Obagi may have the perfect solution for you. Obagi’s Nu Derm Exfoderm Forte (the 4th step of the Obagi Nu Derm System) is an exfoliating lotion that possesses the ability to both cleanse and repair the skin. This includes…