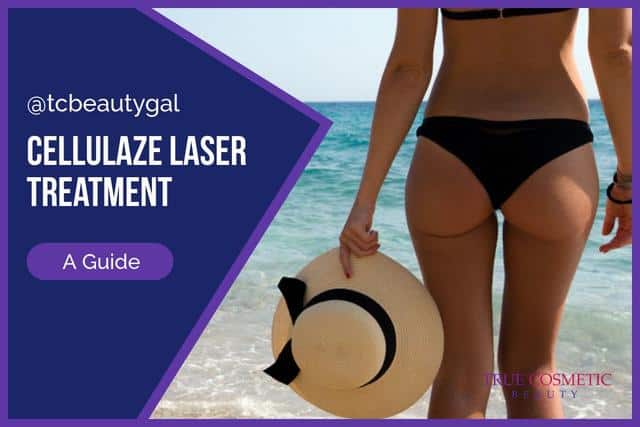 Sick of seeing cellulite around your thighs and buttocks? Millions of women develop cellulite in these areas and have an insanely hard time getting rid of it.

Traditional diet and exercise can help dissolve some of it, but usually never works to completely rid the affected areas of that cottage-cheese-style appearance. So, what can you do to fully remove cellulite? Specialized treatments such as Cellulaze may be able to help.

Cellulaze is recognized as one of the first cellulite removal treatments that is truly effective for the long-term reparation and prevention of cellulite. It’s a minimally-invasive, laser-based process that involves inserting a very small tube under the skin and blasting the affected areas with laser energy.

Cellulaze, which is now used in the United States, Europe, Australia, Canada, and Korea, was developed by Cynosure. For those of you unfamiliar with the brand, Cynosure is also the same company behind the popular SmartLipo fat reduction service. In fact, the two procedures actually use very similar technology.

During this procedure the physician will direct the laser to aim at damaged fibrous bands attached to the skin. These bands are typically what cause the unpleasant crater-like divots on the skin.

The laser removes the hold the bands have on the epidermis which, in turn, gets rid of the bumps and helps restore the skin’s natural flat and smooth appearance.

Cellulaze is one of the highest-rated cellulite removal services available today. Why? Well, it works. In fact, you should see noticeable results almost immediately after your first treatment. The best results will be seen 3 to 6 months after, though, when the skin has properly healed and new, healthy cells have developed.

Only one treatment is required for great results. Cellulaze helps to make skin thicker, restore elasticity, and get rid of those awful bumps and lumps that are associated with cellulite.

Cellulaze Before and After Photos

Words only go so far as to explain how well a treatment works. That being said, here are some before and after pictures showing off the results that people achieved using this service:

NOTE: The pictures above represent real patients that underwent the Cellulaze procedure. Treated areas varied but most people have either their thighs or buttocks done.

The price of a Cellulaze treatment varies depending on where you live, where you go to have it done, and the severity of your cellulite. Generally speaking, prices can range from $2,500 to $8,000 or more. On average, the cost is typically $5,300 per session.

The best way to get the best deal on a treatment is to shop around. Ask for quotes from various medical spas and plastic surgeons in your area to determine what the going cost of a single session is where you live. Some med-spas also offer limited time specials from time-to-time, especially during the fall and winter months.

It’s one thing to read through a text-based review or even the information provided on a surgeons website. While this information is invaluable, it’s not always an accurate depiction of how well a treatment works. For that, you should rely on the word of the public.

That being said, here are some of the reviews we found for this treatment from real people that have actually had it done (not big enough? click the review to expand it):

Overall, opinions of Cellulaze are fairly mixed. Many claim they saw significant improvements in their skin and that the treatment was able to completely rid them of cellulite. Others, however, state that they are still waiting to see results months after having the procedure. Some of these people may not have waited long enough to provide an accurate evaluation of the service, though.

For the most part, reviews for Cellulaze seem to be tipped more toward positive than negative, though. Roughly 70-80% of those that underwent the procedure said they were satisfied with the results and would recommend the treatment to others.

I’m not a fan of medical ‘procedures’ in the first place. But ones that are considered elective (not health insurance reimbursed) and with fairly mixed reviews are way off my radar.

While I really don’t have cellulite issues yet, I do make a killer coffee scrub – recipe here – but here are a couple of my favorites if you don’t want to be bothered whipping one up one your own.

Either way, a great coffee scrub is every bit as effective on your fanny and legs as it is on your face. Plus it’s cheap, even if you buy it, and lasts forever.

Want to know what Cellulaze procedure entails? It’s quite simple, actually. First off you’ll probably have a short consultation where the physician and/or assistant will go over the details of the process, determine if you’re an ideal candidate, and figure out where to actually apply the treatment on your body.

On the day of your treatment the physician will begin by marking the areas you want treated using a permanent marker (such as a Sharpie). There are generally only one or two incision sites. It’s worth noting that these incisions will be very small, not much bigger than a small dot.

Local anesthesia will then be applied to the areas designed for incision sites. Yes, this means you’ll be awake and aware of everything throughout the entire procedure. This is a minimally invasive treatment in which you should only feel mild discomfort as the tube is moved through your skin. During the procedure you should not feel any pain.

After anesthesia is applied the physician will put the tube through your skin and begin using the laser to break apart the fibers that are causing the cellulite. During this there will be some liquid fat removed from the body as well. Again, you should not feel pain while this is being done. The entire process from start to finish usually takes roughly 1 to 2 hours.

Post-Procedure Care and Cellulaze Side Effects

Most people will be able to return to work and their normal daily activities within one or two days after the procedure. You may experience some moderate bruising, soreness, and a bit of leaking a couple weeks after your procedure is complete. This is completely normal and to be expected.

In most cases you’ll be asked to wear a compression garment for several weeks after having Cellulaze done. The garment will help the skin heal and re-structure itself appropriately. It is highly recommended that you follow the instructions provided by your physician as closely as possible to ensure the best results possible.

As mentioned above, you will see improvements in your skin directly after your treatment but optimal results will appear after 3 to 6 months have passed.

Nad’s hair removal strips and cream (and other related products) has been, and is currently, a very highly regarded personal care product. Five years after its release, the British newspaper The Guardian announced that Nad’s was the best selling personal care product in Australia, grossing over $7 million. An Australian newspaper, the Sydney Morning Herald…

Have untamable, oily skin that causes breakouts on a regular basis? Or maybe you find it exceptionally difficult to get rid of every ounce of dirt and grime on your skin with a traditional cleanser? Either way, Obagi’s famous Nu Derm Foaming Gel might do the trick for you. A powerful cleanser, it works to…

Every woman wants to look younger and have their skin glow with imminent beauty. The problem, especially when you’re older, is that your skin gradually loses its ability to stay firm and free of wrinkles. It’s an annoying but real issue and it can be rather difficult to fix. Wrinkles can be pretty stubborn, but…

If you find yourself struggling to grow out your hair or have issues with thin hair you’ve probably considered the idea of using a supplement-based product to correct the problem. For some people supplements are a useful and effective solution. One such product that has become quite popular lately is called Hairfinity. Below we provide…