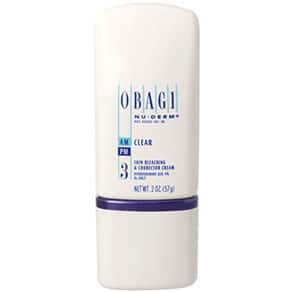 Have some stubborn dark spots on your face that you just can’t seem to get rid of? Are certain patches of your skin slightly darker than the rest? These are all embarrassing, annoying issues that are part of a condition commonly referred to as hyperpigmentation. And it can be a real pain to fix. Luckily, Obagi makes a killer product that works like magic on dark spots called Nu Derm Clear.

Obagi Nu-Derm Clear FX 3 is technically the 3rd step of the complete Nu Derm system but it can be used as a standalone product, too. It’s a simple skin lightening cream that you apply to the affected areas of your skin twice daily – once in the morning, and once again at night. Clear FX is formulated with Arbutin (a very effective and safe skin lightener) and does not contain any harmful ingredients such as mercury.

This cream is designed to work best with the rest of the cosmetics found in the full Obagi Nu–Derm kit but it isn’t necessary to have each and every step. If you just want to focus on getting rid of dark spots on your face (or other areas) this should work decently. It is recommended, however, that you use it in combination with a broad-spectrum sunscreen because it will make your skin a little more sensitive to sunlight.

As with pretty much anything else that is made by Obagi the Clear FX 3 has received many rave reviews from actual customers. Most people stated that it worked insanely well to clear up hyperpigmentation.

A few users did note that you can sometimes experience a little bit of redness and peeling but it isn’t too terrible and the end results are totally worth it. Many more people also said that they saw the best results when using this product along with the Obagi Blender as well.

Here are some of the reviews we found across the web (if you can’t read them you can click them to increase their sizes):

I used the old Obaji Clear with hydroquinone for years. It worked almost miraculously within 12 weeks to lighten every tiny spot and freckle on my skin. But after using it over a longer period of time, I noticed my skin was becoming more fragile.

I was having broken capillaries appear, and I read that Clear could thin your skin out, as well as causing concerns about cancer. So I stopped using it and over time I wished I had something to replace it. Now Obaji clear is made with ingredients that have all the benefits of the spot lightener hydroquinone, but without the side effects.

The only drawback is that it takes longer to work. I fully expect to stay in this for the long haul, though, as I see a visible difference in my skin after just two months. Not as fast or as miraculous – so far – as the old Clear, but way good enough to keep going.

As you can see, most people agree that Obagi Clear works exceptionally well. Some people even said they used it as a last resort after many failed attempts with chemical peels & other products. The reviews posted above are from reputable beauty sites where real people post their opinions of cosmetics that they’ve used.

Obagi products are available from a very select few retailers. The best place to go, in our opinion, is Amazon. They have competitive prices, fast shipping, and world-class customer service. 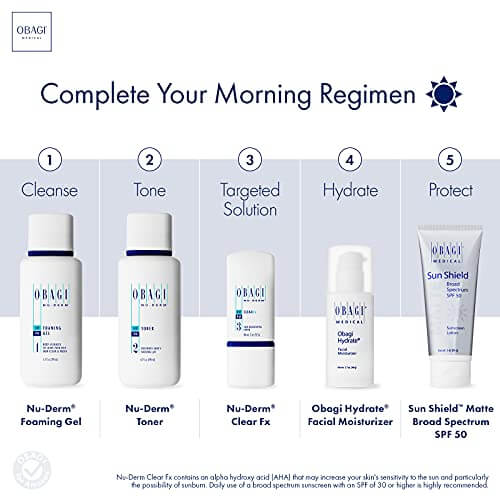 Tired of dealing with awful acne breakouts and having to hide your skin using makeup and other products? Well, you might want to give the Exposed Skin Care Acne Treatment System a shot! We got our hands on one of these kits and tried it out for ourselves. Below is our full experience compared to…

The struggle of fighting for flawless, beautiful skin is an endless one for many women. Probably one of the toughest obstacles to overcome for women over 40 are dark spots and age spots. These are small patches of skin that have become darker than the rest of your complexion. They occur as women age and…

Trying to find a solution that will help reduce the appearance of unsightly dark spots? Well, Obagi has a product designed for that exact purpose. Blend, which is step #5 in the Obagi Nu-Derm system, is a hydroquinone-based cream that targets problems pertaining to skin discoloration. About Blend The formula consists of a 4% hydroquinone…

Aside from the face what parts of the body show age more than anything else? That’s an easy one. The chest and neck, if not properly cared for, can quickly and easily give way to the signs of aging. The skin around these areas tends to get damaged by the sun easier, becomes loose, or…

Any woman with even a little knowledge of beauty knows that sunlight can be an awful menace to your skin. And so can the dryness it causes. That being said, it’s always important to protect your skin with a great sunscreen and keep your skin refreshed with a deep moisturizer. Dermalogica’s Dynamic Skin Recovery, a…

As we go through life, our skin may begin to show age spots, freckles and other darkening. Every year, people spend millions of dollars on harsh, irritating skin lightening treatments such as chemical peels and dermabrasion in an effort to remove these dark spots. Skinception Illuminatural 6i is supposedly (according to their page) a safe,…